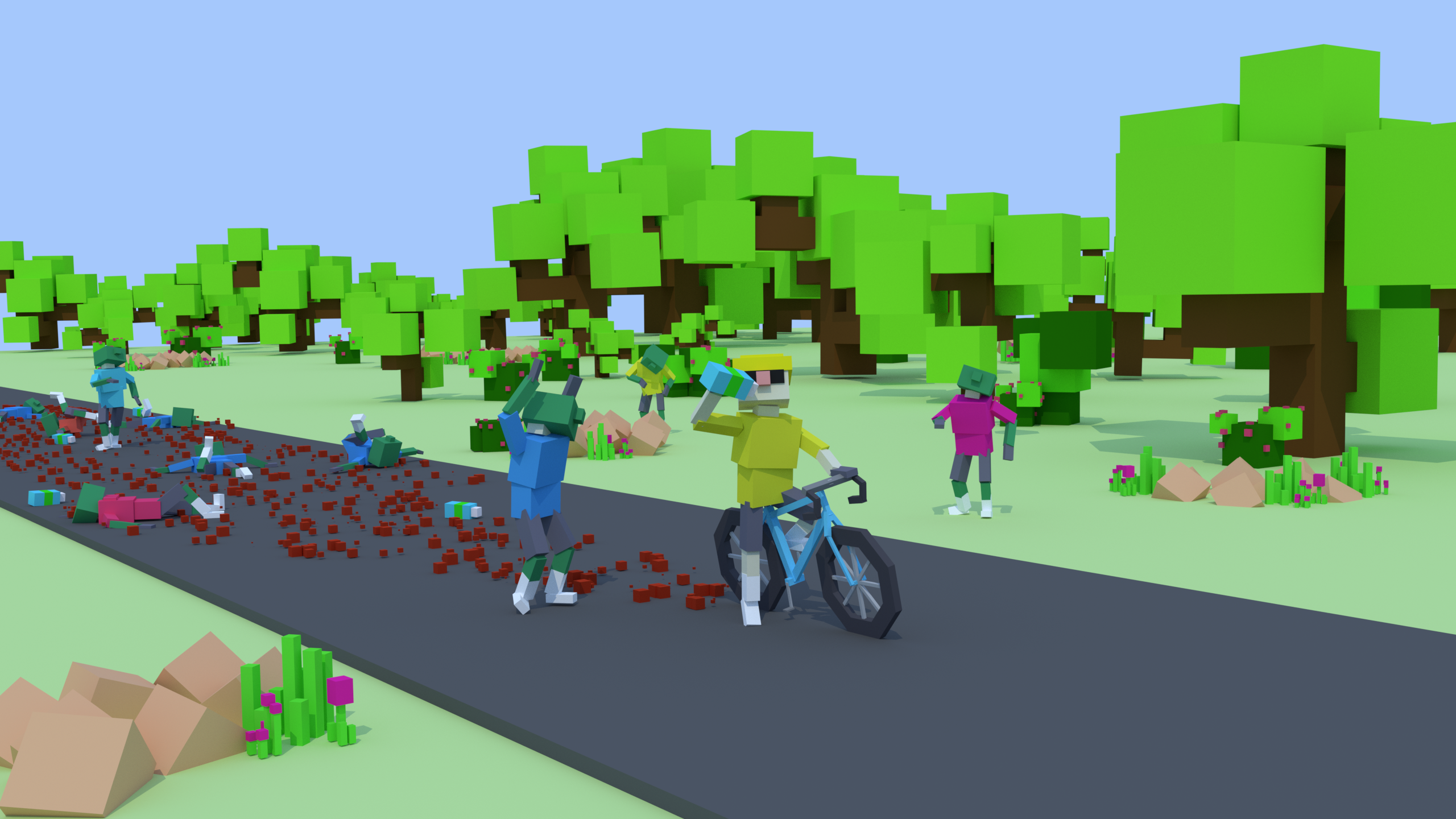 This is the Post Mortem of Tour de France Legstrong, our contribution to the game jam of the 41st Ludum Dare (LD41) which took place in april 2018.

We founded the company Ananki AS late in 2017. Our goal is to make enough money to quit our day jobs, start making games fulltime and live happily ever after!

We had never worked side-by-side before and LD41 was therefore the perfect opportunity for us to work close together in an office-like environment with defined goals and deadlines. All in all, very similar to what we face when our company starts taking on huge projects worth billions of dollars.

Our team for this game jam consisted of three people.

Gennon has spent 15+ years coding in various languages and platforms. Basic skills in art and animation. Lead coder on the team.

Doccers has played around with coding, arts and animations since his school days. When he built his own guitar some time ago he was (almost) unanimously voted our sound guy for this event.

Freebo, yours truly, is a jack of a few trades but unfortunately the master of none.

Depending on what was needed, we could pretty much juggle our resources around to whatever issue was most pressing.

As this was our first game jam event we did not have any high expectations in terms of score or ranking. The important thing for us was to get something “out there”, no matter how good or bad it would end up being. With this in mind we knew that the most important thing to do was to minimize the scope of the project.

In the evening, we all arrived at the location which was to be our base of operations for the following days. We started by creating a new project in Unity. We also downloaded the game-jam-menu-template distributed by Unity Technologies via the Asset Store. (Little did we know that this would bring more problems than it was worth.)

Next, we briefly read through the final 10 candidate themes of LD41, all of us concluding differently on which theme was more likely to be the selected theme.

Living in central Europe, the theme of LD41 was to be announced 03:00 saturday morning. Our strategy was to get a good night’s sleep and start off fresh the following day.

We got up early. Pretty much all of us had slept uneasy and dreamt about the event. Would we manage to come up with any ideas? Did we have the required skills to make it within the timeframe? Which theme would we get? We were quite nervous but also very excited to see the announced theme.

This was a big surprise to us as this theme seemed to limit the creativity of the developers. There is a small chance for someone to stumble upon a new groundbreaking genre by combining two existing, but in our mind, these constrains would simply force many developers to design bad or boring games. Without discussing the theme selection any further, we quickly started to work.

Before the event started we had agreed to perform various brainstorming exercises to quickly come up with an idea. Our inspiration came from the following techniques:

First, we quickly made notes of all the existing game genres we could think of. We wrote every single one down on a post-it note and stuck them to the wall. This should help us in coming up with new ideas where we combined two of them in crazy ways.

Then; with the three of us sitting around the table, we each had 5 minutes to come up with an idea which combined two of the genres and write it onto a post-it note.  After the 5 minutes had elapsed, the notes were handed off to the person sitting at our left for read through. This spawned new ideas which were added to a new post-it note. After four rounds of doing this we had about 12 ideas and we figured that we had enough of ideas to review them and decide which one to select.

What could possibly go wrong from here?

After deciding on the concept, we started coming up with a story and ideas for what we wanted to include in the game. The game should start as a cycling simulator. After a certain time or occurrence of an event, the celebrating crowd should turn into zombies and chase the player. We also wanted other cyclist zombies chasing the player.  Initially we decided to have two different health bar functions, one which kept track of the normal health bar and one which we wanted to name EPO bar. The EPO bar would start to fill up once the player hit the first zombie and continuously increase throughout the stage even though the player did not collide with the zombies. We also thought of the possibility of drinking from the water bottle to decrease the EPO bar. To make the story funnier, we decided to name the player France Legstrong.

All the various features and ideas were added to a separate post-it note. We discussed all the ideas and sorted them into two different groups on the wall. Required items and desired items.

The required item list consisted of items that we knew we had to include in the game.

The desired items list consisted of items we really wanted to include but were able to skip if we did not have enough time to implement them.

We later divided the required items list into sub categories; Art, Sounds, Music. We did not have any mechanics list at this point as we had already concluded on the mechanics. We wanted the old “track-and-field” feel where you needed to quickly alternate the arrow keys to gain speed, and we wanted the ability to throw the water bottle at the zombies.

A few hours after we started the game jam, we had an idea and post-it notes covered the entire wall!

We quickly divided the initial tasks based on what we wanted to do.

Doccers started on modeling, rigging and animating the main character and his bicycle.

Freebo worked on the player controller and later the stage controller.

Gennon created the basic scene and continued by making environment assets in Blender.

When we quit working at about 23:00 we were pleased with ourselves. We had the game mechanics up and running, but more importantly we had managed to find an interesting idea and we had defined the components required to implement it.

We got up early at about 06:30 and quickly continued working.

Gennon continued working on the various environment arts. He made the ground planes and added the spawning of zombies. He then added celebration and win conditions.

Doccers worked on zombies and added these to the scene. He added game-over-scene and improved win-scene.

Freebo added mechanics to throw water bottles, made the simple UI and the progress bar.

Two days into the jam, we knew that we had a lot of stuff left to implement on the last day. The game did not really feel like a game just yet. We still had a lot of content that we wanted to include, but at this point we had to start cutting things away from the scope. The EPO bar and the players transformation to a zombie was cut away. The cheering crowd would remain zombies for the entire time. We also decided that zombies could not ride the bicycle after all. At least we still felt confident that we would be able to publish “something”.

Some of us went to bed at about 23:30, but Doccers persisted to fix some issues with the zombie rigging.

Last day of the jam! We woke up to a finished win-scene as Doccers had stayed up late. This was a nice boost to our morale as we started to tire from all the constant work.

Gennon added the high score functionality and added the mechanics and animations to pick up water bottles.

Doccers added the ragdoll functionality to the zombies and player.

From the beginning we counted on the menu and scene transitions to be based on the game-jam-menu-template. However, after spending a lot of time on implementing this asset, and reading the reviews on the asset store, we discovered that this asset contained some bugs and the documentation was outdated. After having lost a few hours of work debugging, we found that the safest way to go was to create the scene transitions and menu from scratch.

Most of us had work to attend the following day, so we were eager to deliver well ahead of the deadline at 03:00. At 20:00 we decided to stop implementing any new features and started to merge everything together and collaborate around one computer. We had to do some adjustments to make the music start and stop at the right time. Fading of both scene and music transitions was thrown out the window. The pause menu controlling the audio mixer was also cut. We tweaked the number of zombies, the length of the stage and the number of water bottles. At 23:00 we had everything ready, or so we thought. We created an account on itch.io to publish the html5 build. We also built for Windows, Mac and Linux. After running the build and completing the stage, we found that the high score values were not displayed! Naturally we had to fix this issue and do a whole new round of builds. We then went on to make the the icons and screenshots. At 0:00 everyting was ready. With pride and relief we clicked publish!

We describe the result as a merge between a cycling simulator and an apocalyptic survival game.

What was good about the process?

I believe we had a very good process when creating the ideas, and I believe that we successfully selected an idea with the right scope for a 72 hour jam. In such situations we will always be tempting to go for a “better game” with more content, but we managed to keep it simple from the start.

We were extremely dedicated. Except for the 6-7 hours of sleep every night, almost no time was spent on other things. Our meals were consumed infront of the computer or in front of the TV watching the Twitch steams from other participants.

What could we have done differently?

Our initial idea was to create some fitting music ourselves, but as other tasks took more time we had to cut this idea and instead go and find some available music online.

It would be refreshing to go for more walks. For the entire weekend, we probably walked for less than 1km each even though the sun was shining almost the entire time. We should really have spent a bit more time outside.

We should probably have named the character Vance, Frans or Franz Legstrong to make the naming joke more apparent.

When we are writing this Ludum Dare Post Mortem, there are still a few days left of the voting. Based on the comments alone, a large majority of the players seem to have enjoyed the game although some consider the pedaling mechanics to be too straining on the fingers. We mostly agree with the comments. The strength of the game is the animations and artwork as well as the mood in both end scenes.  Also, we still enjoy hitting zombies with a full charged throw of the water bottle. 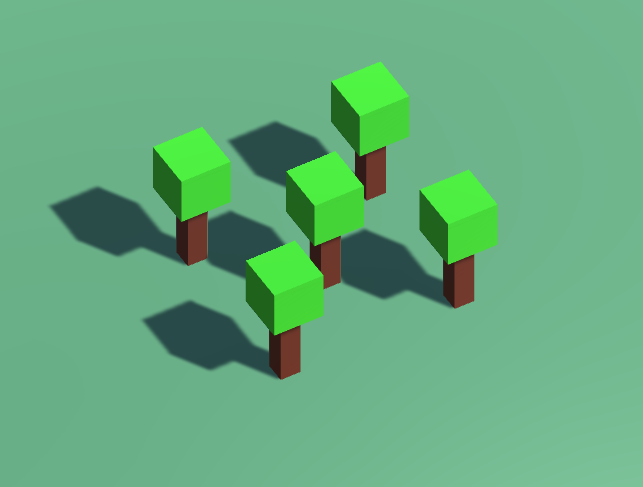